Genesis of the new instrument

At the end of October 2010, the great organ of the Redemption Church, silent for several years, received a meeting of the delegates to Culture of the City of Lyon, owner of the instrument, the representatives of the parish and the technical consultant Eric Brottier. The issue was to statute on the necessary restoration of this great instrument, work of Joseph Merklin. The decision of the City of Lyon fell at the end of meeting and astonished the priest, the organist and the members of the Association of the Friends of the Organ: the long-awaited restoration is postponed sine die, the city preferring to launch a registration procedure as Historic Monument of the organ before being repaired, in order to save time and involve State funds.

Every cloud has it silver lining. Faced with the grim prospect of being deprived from the instrument for many years, under the leadership of Father Georges Favre, himself amateur organist, the parish decided to allocate the envelope provisioned for the restoration of the great Merklin organ for the construction of a new organ which it would own.

Eric Brottier then proposed to the parish a recent project by the organ manufacturer Frédéric Desmottes, which was first proposed as a tender for another city in the suburb of Lyon, but not retained. This was considered as a real exciting project by all those who were present, even if the organ must be somewhat amplified to fit the vast dimensions of the Redemption Church.

Inspired by the Flemish manufacture of the early 17th century, the casing of the proposed organ reveals an initial aesthetic choice that discussions between the parish and the technical consultant will make somewhat turn to a more Germanic and later style inspired by the famous Arp Schnitger’s manufacture. The objective was that this organ has the widest possible repertoire while retaining a marked character and aesthetic, and that it could be complementary to the great symphonic Merklin organ placed on the tribune and now registered as Historic Monument. Initially planned with an expanded mesotonic temperament, the final choice was a versatile temperament inspired by Vallotti.

The execution of the market agreement occurred on February 14, 2011; after almost two years of work, the organ was installed in December 2012 and inaugurated during the “Orgue en Jeu” festival on 12th and 13th October 2013.

The aesthetic is complementary to that of the Merklin organ, is inspired by Flanders and North Germany (17-18th century) with a temperament of 1/6th of coma. Contrary to the initial plan, the instrument ultimately has two manuals, the idea of a small Brustwerk was abandoned for financial reasons. 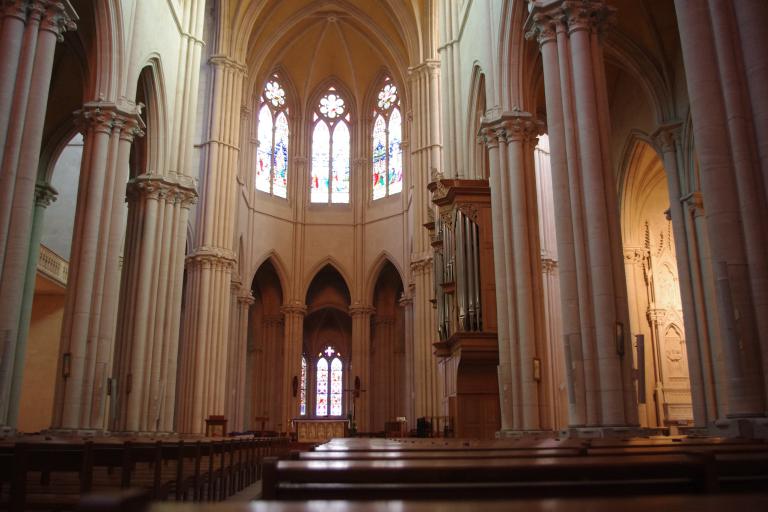 Private aera for members of the AAOR.
Special offers, major events in preparation, unpublished documents, a welcome gift ...
Subscribe to our Association to benefit from this space

Our resources come from contributions of members, donations, quests for the concerts and support in our actions.
Support us
The Friends Association for the Redemption Church Organs - Lyon - France - aaor@aaor.fr